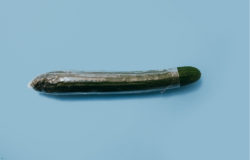 The pros and cons of packaging cucumbers

More and more consumers value sustainability and for some, this includes doing without packaging in general. To meet this demand, the supermarket chains Aldi, Penny, Edeka and Rewe began selling cucumbers that have not been packed in protective foil in Germany in October 2019. The Rewe Group alone aims to save up to 160,000 kilograms of shrink film per year by implementing this measure, as cucumbers are among the most popular vegetables in Germany, with an average consumption per capita of 6.5 kilograms per year.

WITHOUT PACKAGING, CUCUMBERS ARE SENSITIVE

However, this vegetable, which consists of 97 percent water, is sensitive; the thin, recyclable polyethylene foil protects cucumbers against dehydration and damage during transport (www.interpack.de/Perfectly_imperfect) . This mainly becomes an issue outside the German season, after the end of September. To still be able to meet the demand for cucumbers, the vegetables are largely imported from Spain. However, transport and handling can take four to five days. Without the protective packaging, which can extend the cucumber’s shelf-life, a lot of cucumbers shrivel or turn yellow during this time and are then thrown away. Besides the financial loss, this alarms critics battling food waste and loss.

This pits the resources used to create the shrink film, which is usually made out of polyethylene, against the unnecessary consumption of energy, water and agricultural land use, including the CO2 emissions that arise during transport, that is caused by cucumbers that are then not consumed.

SAVE FOOD is just one of the initiatives committed to countering such forms of food waste. The initiative was founded by FAO, UN Environment and Messe Düsseldorf, who have joined forces with representatives in politics, business, NGOs and research institutions to advance solutions that counter food waste and loss.

German supermarket chains are taking their own, individual measures. SAVE FOOD member Lidl Germany offers cucumbers with and without packaging; the majority is wrapped in shrink film.

Real has developed a new transport solution and prevents the vegetables from drying out in their boxes by covering them with paper; initial tests have proved successful.

Aldi and Edeka are planning to adapt transport and storage processes within the supply chain, involving all stakeholders. Aldi, for example, has already conducted regional tests with suppliers to keep transport routes short and forgo temporary storage.

Rewe and Penny aim to prevent premature cucumber spoilage by returning to shrink-wrapping a low percentage of the affected foods – around five percent; however, using the thin shrink film to protect against premature spoilage will be the exception.

This is consistent with Rewe Group efforts to only package few, specific items of all in-house brands sold by Rewe and discount store-subsidiary Penny in plastic and to ensure they are recyclable by the end of 2025. By as early as the end of 2020, the group aims to use certified raw materials exclusively in its paper packaging; more than 1,400 articles have already been adapted accordingly. According to company statements, annual plastic savings amount to around 8,200 tonnes. 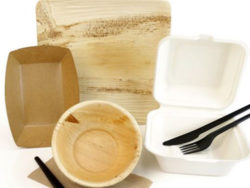 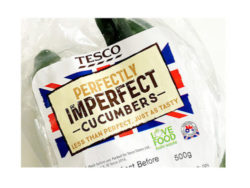