After years of debates, a resolution has finally been reached. Following a multi-stage plan, items made out of single-use plastics are to be banned throughout the EU by 2021, starting with tableware and cutlery, cotton buds, straws and balloon sticks. Plastic beverage bottles are to have a recycling share of 25 percent by 2025.

Plastic bags at supermarkets, however, are not affected by the new regulations. Currently, the only applicable regulations are national ones. France banned single-use plastic bags as early as 2017, and in Britain, alternatives to plastic bags and other single-use packaging are on the rise. The German Federal Government aims to ban plastic bags from supermarkets as soon as possible – after the law has been passed by the German parliament and the Bundesrat, Germany plans a transitional six-month phase, during which supermarkets will be allowed to provide their remaining stock to customers. A few supermarkets have already taken the first steps of their own accord and are now offering packaging solutions that are just as practical as plastic bags.

In 2018, Germany provided customers with more than two billion plastic bags – the equivalent of a consumption of 24 bags per capita. The ALDI Nord and ALDI SÜD supermarket chains have increasingly offered reusable bags as alternatives to conventional single-use carrier bags since as early as 2017 and, at the beginning of 2019, permanently removed single-use plastic packaging from their range. In keeping with their “Reduce. Reuse. Recycle.” sustainability principles, the chains plan to completely do without certain materials and to increasingly employ reusable materials in their packaging in future. In order to achieve this, the discount retailer established the Accelerator Program TechFounders at the beginning of 2019. Of the more than 80 applicants, three start-ups underwent a 20-week development programme. ALDI Nord and ALDI SÜD will add the packaging solutions developed in the course of the programme to their ranges. 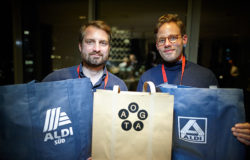 Start-up OGATA originally applied to ALDI with a shopping bag made out of paper. OGATA then developed a bag made out of more durable plastic fibres for ALDI. Photo: ALDI

Industry 4.0 on the rise

Besides edible straws based on sustainable raw materials, such as grain and apple pomace, and a recyclable and reusable bottle for toiletries that consumers can hang in their bathrooms, an innovative product solution for shopping bags convinced the supermarket chains. The reusable JohnJohn bag is made out of durable plastic fibres and can also be used as a rucksack. The bag is available in a selection of colours and can be personalised with prints. 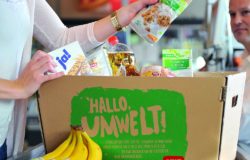 The REWE Group selected one week in the middle of August as its test phase. For six days, around 1,000 of the food retailer’s stores no longer provided bags on a roll for fruit and vegetables and instead offered their customers reusable nets for just under 50 cents a piece. REWE has already completely done away with plastic bags for transporting the entire content of a customer’s shopping cart; according to company statements, this saves around 140 million plastic bags across Germany per year. Customers that haven’t brought their own bags to the store can choose from a range of alternative and reusable packaging solutions: 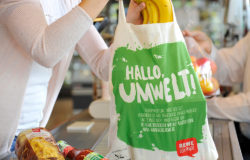 Cotton bags are just one of the many alternatives REWE offers. Photo: REWE

REWE also aims to combat food waste (https://www.save-food.org/). Since 1996, the group has donated unsold food that is in perfect condition to nearby food banks; during a 13-day donation campaign in November 2019, customers could purchase a bag filled with food and personal hygiene products for five euros; the bags were then distributed to people in need. In total, 422,346 bags were distributed to non-profit organisations.

Even though British supermarket chains and retailers have voluntarily committed to reducing their plastic waste, consumption increased in the past year, according to the Environmental Investigation Agency.

As a result, Tesco, Sainsbury’s and Marks & Spencer have all redesigned their Christmas ranges this year.

In addition, a few alternatives to single-use carrier bags are on offer. At one of its stores, British supermarket chain Waitrose & Partners, for example, plans to encourage customers to pack fruit, vegetables and grain in reusable containers provided for this exact purpose. The containers will be weighed when empty, and then when filled, in order to calculate the weight and price of the foods.

Co-op, on the other hand, aims to remove all plastics that are difficult to recycle from its product range by 2023. In 2018, the company replaced around 60 million single-use plastic bags with compostable carrier options, which can be purchased for five cents. After use, the sacks can be processed to peat-free compost. 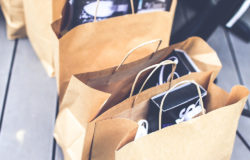 Some consider this option a good alternative to plastic: paper carrier bags made out of recycled paper. Photo: Pexels

Retail chain Tesco’s non-plastic approach focuses on the recycling cycle; the chain is gradually doing without plastics that are difficult to recycle in its own brand products. Tesco also plans to install a reusable container system for its own online services.

And finally, in June 2019 Sainsbury’s announced that it wants to ban plastic bags for loose fruits, vegetables and baked goods in each of its stores and offer paper bags instead.

Millennials not keen on recycling

www.standard.co.uk
How Tesco, Sainsbury’s, M&S and other UK supermarkets are reducing plastic waste this Christmas