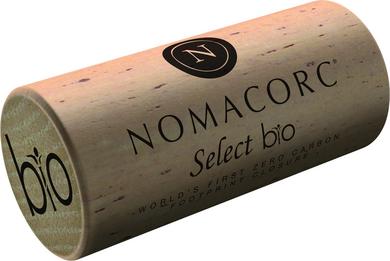 Most bottles of wine savored by consumers today reach them in a standard format that was first adopted in the 17th century: glass bottles and cork closures. However, in recent years debate has intensified on the ideal method for sealing bottles and the problems involving this type of cork. When uncorking a bottle, few people are aware that the cork is actually older than the beverage and undergoes a long production process.

Cork is made from oak bark. The tree takes 25 years to give up its first "harvest" and then every nine years its cork bark can be harvested once again. The long production process and the presence of trichloroanisole (TCA), a fault of cork closures that imparts the aroma of mold (wine taint), has intensified the search for alternatives to ensure the longevity of the beverage, which has given rise to the use of engineered alternatives for bottle stoppers.

Now wine lovers have a more sustainable option for their beverage. Nomacorc, the world’s leading producer of synthetic corks, has found an entirely new way to use Braskem’s Green Plastic in its products. Called Select® Bio, the closures are 100% recyclable and feature the same oxygen-management performance as the conventional line, while also preventing deterioration and waste caused by processes such as oxidation and reduction. The Green Plastic made from sugarcane ethanol, a 100% renewable raw material, captures 2.15 kilograms of CO2 for every kilogram produced.

“The use of Braskem’s green polyethylene made from sugarcane gave us the materials we needed to offer our customers carbon-neutral corks, which not only helps guarantee the consistency and quality of the wines, but also supports the development of a more sustainable packaging solution,” explained dr. Olav Aagaard, Principal Scientist at Nomacorc.

To Braskem, using Green Plastic helps strengthen environmental awareness around the world. “Choices such as Nomacorc’s attest to the high viability and excellent growth potential of this technology, which can be fully employed as a sustainable alternative to the use of fossil fuels,” said Marco Jansen, Renewable Chemicals Commercial Director at Braskem.

The birth of new possibilities

Braskem is dedicated to understanding the needs of its clients and the market and to transforming chemistry into a solution for these challenges. In fact, it has invested R$290 million in this cause. That is how Braskem created its green ethylene plant, which was inaugurated in September 2010 and marked the start of green polyethylene production on an industrial and commercial scale, effectively transforming the company into the global leader in the biopolymer market.

I'm greenTM polyethylene is the product of this combination of innovation, technology and sustainability. Its conception required years of research and development. Today the industrial unit has annual production capacity of 200 kton of green polyethylene. Green PE has the same properties, performance and application versatility as fossil-based polyethylene, which makes it a drop-in replacement in the plastic production chain. For these same reasons, it is also recyclable in the same recycling chain used by traditional polyethylene.

Today Braskem supplies bio-based polyethylene to a number of partners in Brazil and the rest of the world that operate in a wide range of industries. Reflecting its constant creation and innovation, Braskem was the only Brazilian company included in the list of the 50 most innovative companies in 2014 published by U.S. magazine Fast Company, in which it ranked 41st.

Braskem is the largest producer of thermoplastic resins in the Americas. With 36 industrial plants in Brazil, the United States and Germany, the company produces over 35 billion pounds of thermoplastic resins and other petrochemicals per year. Braskem is the world’s leading biopolymers producer, with annual production capacity of 200 kton of polyethylene made from sugarcane ethanol.