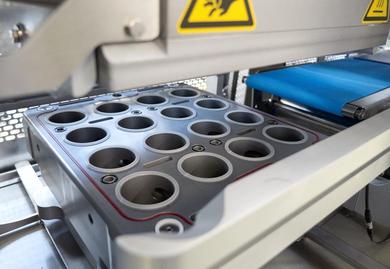 With the launch of the MULTIVAC Tray Carrier System at interpack 2014, MULTIVAC is for the first time presenting a new tray carrier system that significantly increases the cycle output and process reliability of high-performance traysealer lines. The tray carriers even transport trays that would otherwise easily tip because of their shape or light weight, bringing them quickly and safely through the entire process. At interpack, MULTIVAC is showing the functionality of the new tray carrier system and its automatic loading and unloading with handling modules.

The feed and removal of trays using tray carriers has several ad-vantages.

With the tray carrier, the trays can be transported into the traysealers on a multi-lane and multi-row basis. Instead of gripping the individual packs with the gripper and transporting them into the die, the gripper grips one of the tray carriers filled with several packs and pushes it in-to the die. The packs are positioned in a defined manner within the tray carrier, which is advantageous for upstream process steps such as filling processes. Furthermore, the system allows for a quick format change with a multi-lane traysealer line. For this it is only nec-essary to replace the die and tray carrier. In conventional machines that operate with plate chains, a format change is only possible with great effort and expense.

The tray carrier system is particularly suitable for lightweight products which would otherwise tip over easily at higher clock rates of the line. Trays that cannot stand on their own can also be transported by the tray carrier. Packs stand next to each other so that they are secure and stable in the tray carrier.

Automated loading and unloading
The packaging line that MULTIVAC is showing at interpack 2014 con-sists of a high-performance traysealer T 700xs, which is designed specifically for use under industrial production conditions, the H 240 handling module for loading the tray carrier with filled cups, and the H 100 handling module for unloading the sealed trays from the tray carrier. The tray carriers are transported in the traysealer line using a transport conveyor (MCS).

The H 240 is equipped with two handling robots of type HR 460, which grip and place the filled cups in the tray carrier. After the sealing process, the H 100 discharges the sealed cups from the tray carrier and positions them on a discharge conveyor. For visual identification of the cups, the handling modules are equipped with a MULTIVAC Vision System (MVS).