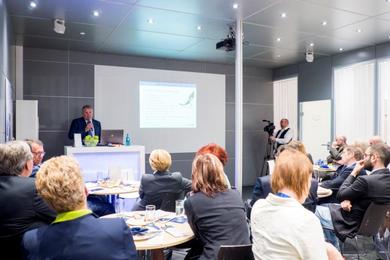 MULTIVAC continues on its path of growth and success. This was the message from Hans-Joachim Boekstegers, CEO of MULTIVAC, to a large number of journalists from home and abroad during interpack in Düsseldorf. The pillars of its success include its strength of innovation, its regional roots in the local economy of Lower Allgäu and the international orientation of the company. The leading international manufacturer of packaging solutions presented itself at interpack on two exhibition stands, and it demonstrated its know-how with packaging machines and concepts for the medical, food and consumer industries.

The company had already started 2014 with a high level of orders, and since then it has been able to book increased orders of around ten percent in the first few months of the year, particularly from Europe and North America. Increasing demand from the emerging countries is also however being recorded. In 2013 the Group had a turnover of over 700 million euros. MULTIVAC's product range and sales organisation were also further expanded. The company now has 74 of its own sales and service companies and has a presence in over 140 countries worldwide.

Hans-Joachim Boekstegers pointed with some pride to the latest extension of the site in Wolfertschwenden: a new production hall with over 3,200 square metres offers space for the manufacture of retrofit and spare parts, as well as for the production of chamber machines. The site now comprises more than 63,000 square metres in total. With its 1,500 employees, MULTIVAC is also one of the largest employers in the region of Lower Allgäu.

Research and development are also crucial guarantors of success for MULTIVAC. Since 2002 the company has filed 230 patents.

Hans-Joachim Boekstegers also sees potential for further growth in the two mega-trends of population growth and urbanisation. This will result in an increasing demand for packaged food and medical products. MULTIVAC will respond to this demand through the development of suitable packaging solutions.