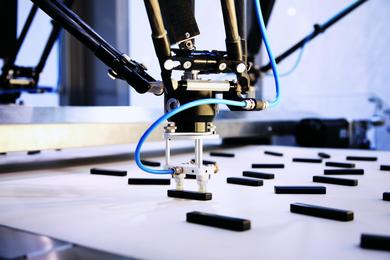 Cama Group, one of the world’s most appreciated packaging companies for the quality and performance of its secondary packaging solutions, will be attending Düsseldorf leading packaging exhibition in order to show its new Concept of Machines: the Break-Through Generation.

The Italian Company is renowned for the Lean Design of its secondary packaging machines and robots. Cama engineers have been designing machines complying with TPM over the last ten years, reaching excellent results not only in terms of technical solutions but in accessibility and hygienic design.

Cama Break-Through Machines are moving a step forward, getting closer to Six Sigma philosophy. Operators’ safety is at first place in the new machine design. Accessibility is - as usual when considering Cama - a key point, together with an increased sanification level.

In Düsseldorf Cama will show a new Side Loading concept, identified as CL 175, offering, according to Cama engineers, the maximum of flexibility. The system is giving an answer to those who are looking for a machine which is able to work with different speeds, different product sizes and different, sometimes with important variations, carton dimensions.

On the Robotics side, Cama will show a state of the art loading unit, where 12 Delta type robots are working together proving the highly sophisticated Co-Flow loading system, now taken to its best by Cama electronic and mechanical engineers.

Cama announced also the release of a high speed Star-Wheel system developed together with SPS (PFM Group). The feeding system is proof of the close relationship between the 2 companies and for sure a new important device to provide High Speed Turnkey solutions.

Together with the Break-Through Generation machines, on Cama stand you will be able to appreciate the traditional Wrap-around case packer: a world best seller, highly appreciated for its flexibility and lean design.

It is clear that after seeing the Cama Break-through Generation, the other machines look like they are from a previous generation. Interpack is the exhibition everybody is looking at in order to discover trends and new ideas. Cama is ready to shock you!