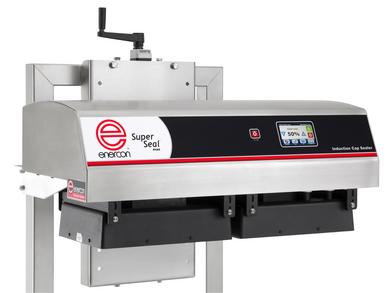 Enercon will bring a touch of excellence to Interpack next month when it launches its latest and most innovative induction cap sealing machine.

The New Super Seal Max will be unveiled at the world’s leading trade fair for the packaging industry and related process technologies at the Dusseldorf Messe, Germany, from Thursday, May 8 until Wednesday, May 14.

The machine is the second addition to the Super Seal Touch range of equipment, which comes complete with a multi-language touch screen.

Designed for use in a wide range of packaging applications, from food and beverage, to pharmaceutical, agrochemical and household, the New Super Seal Max also comes with unprecedented power and control, increased productivity and an easier set-up.

It can be used as a stand-alone production unit or be fully integrated into a continuous filling and capping line, giving complete flexibility of operation.

Richard Bull, managing director of Enercon Industries Ltd (UK), said: "Enercon was the first to offer a touch controlled cap sealing machine in the Super Seal Touch, which was launched at the last Interpack show in 2011.

"Being one of the greatest packaging shows in the world, we decided Interpack was once again the perfect platform to launch our latest and most innovative machine, The New Super Seal Max.

"Enercon has worked hard to create this new machine, which offers increased sealing capacity and a completely new operating system that features one-click away navigation which makes it simple for all to use.

"Our team is looking forward to welcoming people to our stand to see The New Super Seal Max for themselves."

Enercon, the global leaders in induction cap sealing, will be exhibiting for the seventh consecutive time at the show. The stand will be found in Hall 5 Stand E19.

Official Launch Event
Enercon will officially launch The New Super Seal Max - the latest in Enercon's long history of induction cap sealing innovations – at a special event on Friday, May 9. It will take place at Enercon’s stand, which will be found in Hall 5 Stand E19.