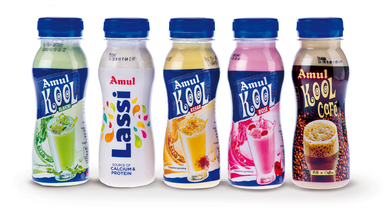 GEA Procomac, the GEA Group’s aseptic bottling specialist, has recently completed the first installation of its aseptic technology for PET bottling in India. The installation at the Amul Dairy in Gujarat represents a step change for the company and the Indian dairy industry in general by improving productivity while promising to change the image of flavoured milk drinks, drinking yoghurt and milk shakes with young consumers in India.

The Amul Dairy is a leading producer that has become a model for the Indian dairy industry. Its products are marketed under the popular Amul Kool and Amul Lassi brands. In an interview recorded for GEA Procomac, Mr. R S Sodhi, the Managing Director of Amul Dairy said the milk drinks were previously considered to be traditional, even old fashioned products by the youth of India. By changing the packaging from cartons or glass bottles to a much more trendy PET bottle, his company had not only reduced costs and enabled greatly increased production, but also made milk drinks contemporary and glamorous and even allowed the products to compete on equal terms with colas and other carbonated drinks on retail shelves.

Mr. Sodhi explained that until investing in the GEA Procomac aseptic filling line, the Amul Dairy had, for over ten years, sold flavoured milk drinks and drinking yogurt in glass bottles. He said that this had caused difficulties because during the peak season there were not enough glass bottles available. Also glass bottles are not as hygienic as PET bottles, they require storage space and they are heavy to transport around India. Conversely PET bottles are made online so do not need to be stored. Mr. Sodhi said that he had been able to increase production ten fold without increasing the factory footprint and, as the weight of the PET bottles is negligible, the product is easier to transport.

But more important perhaps than the practical benefits of the production process is the enhanced image of the product when presented in PET bottles rather than glass bottles or cardboard cartons. “People already know about the product,” said Mr. Sodhi. “Today’s youth want something very contemporary and glamorous. It is our job to make the product available and affordable for them in a trendy packing. We have had an excellent response from customers.”

Mr. Sodhi said that he was very positive about his company’s new aseptic PET filling line. “When we were looking for aseptic technology for packing drinks into PET bottles we searched the whole world. We found GEA Procomac technology to be very good and greatly appreciated the local manufacture.”

He explained that the technology is new in India and he believed his company was the first in the market to have it. “When we started looking for new technology we knew nothing about it so we decided to go to a vendor that could provide a complete system. We knew GEA Procomac was supplying its equipment all over the world. It was a learning exercise for us. In retrospect, going to one vendor was the right decision and gave us the system and the speed that we wanted.”

“I am happy to recommend GEA Procomac for aseptic PET bottling lines for drinks to anyone who wants a large capacity aseptic fill line with very good reliability,” he said. “I think they have got the best solution.”

The elimination of the clean room used in the past for environmental contamination control, and the simplification of the line running procedures, have globally boosted the market for aseptic lines worldwide. Many bottlers have invested in this sector to produce premium segment beverages: innovative drinks in appealing containers.