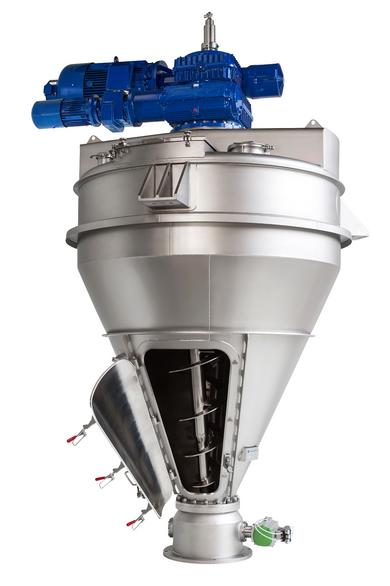 Instant soups were first launched some 50 years ago. Initially as an additional product line for vending machines that served tea, coffee and hot chocolate. At that time, the instant soup mixes were largely supplied to the vending machine companies in bulk. The amount of choice was limited and recipes were simple (starch, salt, fat, colourings and flavourings). Since then, the world of instant soups has grown substantially, and is now a global market segment. One important accelerator has been the improved quality and variety of ingredients that has managed to keep up with ever-changing consumer tastes and expectations.

These improvements, combined with rising production costs, have led manufactures to scrutinise the production processes over the past 15 or so years. At Hosokawa Micron B.V., we have followed these developments closely, and produced a new mixing technology that is perfect for the manufacture of instant soup: the Vitomix®.

Process optimisation
The challenge in the mixing of instant soups lies with the complexity of the recipes. These vary greatly in terms of composition and properties, resulting in two different mixing phases. Conventionally speaking, these are handled by two mixing processes, namely:

Mixing phase 1 – High shear mixing:
In this mixing phase the basic ingredients (powders) are mixed intensively with oil/fat, aromas and flavourings. In order to achieve a homogenous mixture and avoid build-up of agglomerates (lumps), a great deal of mixing energy is required. A conventional mixer used for this process would be a plough shear mixer possibly fitted with choppers.

Mixing phase 2 – Low shear mixing:
The low shear mixer will be fed by the plough shear mixer (phase 1) to name one example, after which, it mixes fragile ingredients such as leafy vegetables and mushrooms, and ingredients such as croutons can be added to the basic mixture.
In many cases, our own Vrieco-Nauta conical mixer is used here. It mixes accurately with minimum damage to the product and is used simultaneously as a live hopper for feeding the packaging line.

By combining these two mixing phases into a single mixer, we have overcome a number of challenges, including how to handle ingredients with differing product properties, but also the issue of and need for large capacities. We were faced with the question of how to mixing homogeneously (which demands a great deal of mixing energy) in combination with the fragile ingredients (which require a restricted amount of energy), and finally, the effect of residual heat caused by the mixing energy on the end product.

Furthermore, we needed to consider the possible disadvantages of combining two mixing phases in one process, and their effect on our ability to respond to developments in the market, for example: the new technology’s effect on process flexibility, cleaning, a potential need for additional production staff and the investment costs.

The smart solution: The Vitomix®

The Vitomix® is a new generation of innovative Hosokawa mixing technology and the answer to optimising this conventional mixing process. It combines mixing phases 1 and 2 as described above in a single mixer, and has an additional live hopper functionality.

It is suitable for use in low and mid/high-shear mixing processes, offers easily-adaptable mixing energies depending on the process stage, without having a negative effect on the mixing or the quality.

During the mixing process, the product is liquefied by two conical ribbon screws. The integrated sprayers atomize the liquid directly onto the very rapidly moving product surface, which creates the perfect conditions for adding liquids, without the formation of agglomerates (lumps), and without making compromises on mixing speed. As a result, choppers in the mixer wall are unnecessary.

The conical vessel with central outlet guarantees a very high yield, batch after batch, often without the need to clean in between batches. Internal interim storage has become superfluous; and cleaning and logistics are simpler and quicker because the same mixer can be used for mixing in the fragile ingredients with the same amount of care and accuracy.

The introduction of new designs or changes to mixer lines or mixer types have an immediate effect on the overall design of a production line, including product flow, feed and discharge, the availability of staff and the physical space in the production facilities. This is why we recommend involving us from the very start. We can help you find the smartest, most cost-effective concept and best investment for the long term.