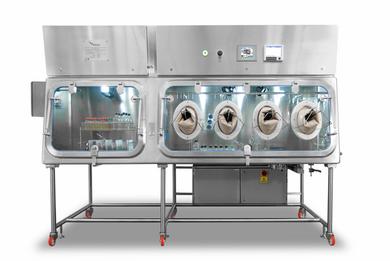 Telstar has introduced the new ionHP biodecontamination system for use in pharmaceutical aseptic enclosures, an innovative technology which resolves some of the traditional difficulties associated with H2O2 biodecontamination processes. Unlike conventional systems, the ionHP technology developed by Telstar for application in aseptic isolators increases the efficacy of the decontamination process and reduces degradation of construction materials by virtue of requiring a very low concentration of H2O2. Reduced bio-decontamination cycle times are possible since the process efficiency is not affected by temperature and humidity and therefore there is no need to pre-condition the chamber prior to H2O2 injection.

More than three years ago, following intensive research by the Technology Centre for Barrier Isolation Systems of Telstar, located in the United Kingdom, the company identified an alternative decontamination system, using ionHP (ionized Hydrogen Peroxide) specifically aimed to aseptic pharmaceutical processes. The initial applications for ionHP had been for large warehouses, hospitals and airplanes and intended for single use, therefore the control systems requirements were basic.

Telstar has pioneered the development of this system for aseptic isolation technology thereby introducing a viable alternative to traditional systems. The ionHP system has been designed into the Telstar standard sterility test isolator range mechanically, electronically and through software; the result being a PLC based integrated system. This has been followed by extensive testing to provide a proven, globally validated system that provides repeatability. This has resulted in significant technological advancement through the innovative use of a unique decontamination system, previously applied in a different industrial sector.

ionHP includes a process of ionization that imparts two characteristics introduced by passing a mist through an ionized plasma field:

ionHP can be used in open air and, once ionized, acts like a gas as opposed to a vapour, which offers many operational, commercial and environmental benefits. In this sense, ionHP requires a significantly shorter decontamination process time than the traditional alternatives and it has no requirement for special atmospheric conditions, which eliminates the need for the air conditioning units required with traditional systems, reducing equipment cost. At the same time, ionHP uses a base concentration of 7.5% volume, whereas traditional H2O2 systems use 30-35%. This lower level of concentration is more conducive to shipping worldwide due to it being below the threshold level for transportation (especially air transport).

The new innovative system is also is more effective due to the positively charged droplets being attracted to the negatively charged surface areas; ionHP does not leave behind any residue, reducing costs by shortening cleaning activities.

Hydrogen peroxide is the primary component used, which breaks down into oxygen and water at the completion of the decontamination process, making it one of the most environmentally friendly decontaminants available.