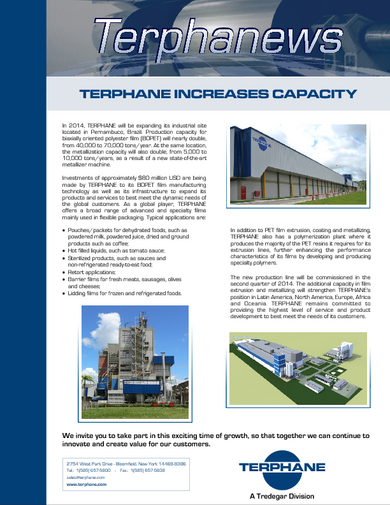 In 2014, TERPHANE will be expanding its industrial site
located in Pernambuco, Brazil. Production capacity for
biaxially oriented polyester film (BOPET) will nearly double,
from 40,000 to 70,000 tons/year. At the same location,
the metallization capacity will also double, from 5,000 to
10,000 tons/years, as a result of a new state-of-the-art
metallizer machine.
Investments of approximately $80 million USD are being
made by TERPHANE to its BOPET film manufacturing
technology as well as its infrastructure to expand its
products and services to best meet the dynamic needs of
the global customers. As a global player, TERPHANE
offers a broad range of advanced and specialty films
mainly used in flexible packaging. Typical applications are:
Pouches/packets for dehydrated foods, such as
powdered milk, powdered juice, dried and ground
products such as coffee;
Hot filled liquids, such as tomato sauce;
Sterilized products, such as sauces and
non-refrigerated ready-to-eat food;
Retort applications;

and cheeses;
Lidding films for frozen and refrigerated foods.

In addition to PET film extrusion, coating and metallizing,
TERPHANE also has a polymerization plant where it
produces the majority of the PET resins it requires for its
extrusion lines, further enhancing the performance
characteristics of its films by developing and producing
specialty polymers.
The new production line will be commissioned in the
second quarter of 2014. The additional capacity in film
extrusion and metallizing will strengthen TERPHANE's
position in Latin America, North America, Europe, Africa
and Oceania. TERPHANE remains committed to
providing the highest level of service and product
development to best meet the needs of its customers.