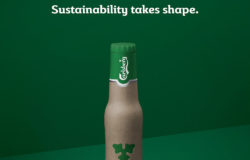 As early as 2015, Danish brewery Carlsberg launched a project to develop a bottle made out of sustainably gained wood fibres, the Green Fibre Bottle. According to company statements, they are about to make a breakthrough: The world’s first paper beer bottle is 100 percent bio-based and fully recyclable.

The development of the Green Fibre Bottle, which is made out of wood fibres, was launched in 2015 as a joint project between Carlsberg, innovation experts ecoXpac, the packaging company BillerudKorsnäs and the Technical University of Denmark. In April 2019, BillerudKorsnäs and bottle manufacturer ALPLA founded Paboco, the paper bottle company, with the exact same goal. Merely months later, in mid-October 2019, they were joined by other large, international companies, among them Carlsberg, L’Oreal, the Coca-Cola Company, the Absolut Company and Avantium, a technology company. 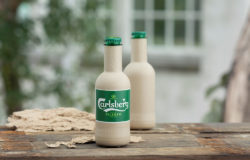 Bottles made out of wood fibre

Carlsberg has almost achieved its goal: The brewery claims to have almost overcome the final technological challenges on its way to producing the world’s first paper beer bottle. Two prototypes of the Green Fibre Bottle have officially been introduced, both of which are made of sustainably produced wood fibres and are fully recyclable. Their inner protective barrier maintains the consistent, high quality of the bottled beverage. Here, the company employs a thin foil made out of recycled PET polymer for the one bottle, whilst a foil made out of 100 percent bio-based PET polymer is used in the other. In parallel, Carlsberg is on the lookout for another solution that will enable the company to exclusively produce bio-based beer bottles that are completely free of polymers. 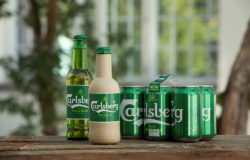 The colour of the labels and caps on the new bottles provide recognition value for consumers. Photo: © Carlsberg Group

This packaging innovation is an essential element of Carlsberg’s “Together Towards ZERO” sustainability programme. The company aims to achieve zero CO² in its breweries by 2030 at the latest and to reduce carbon dioxide emissions along the entire value chain by 30 percent. This focus on sustainability has already borne fruit: In 2018, the Danish company brought a wide range of sustainable packaging innovations to market: from recycled shrink film and eco-friendly label ink to the Snap Pack, which uses an innovative bonding technology to replace conventional plastic carriers for six packs. 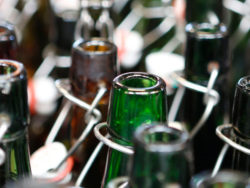 Beer in wood and cardboard 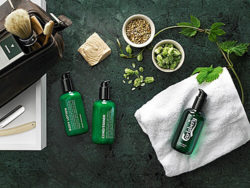