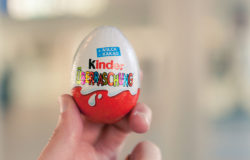 No Kinder Surprise Eggs in the USA for almost 50 years now. The reason: a law adopted in 1938 that prohibits packaging objects inside sweets. Photo: Derek Key / Flickr.com

Kids the world over love surprises – not only for Easter, Christmas or birthdays. And often the unwrapping is the best part for them. For many anticipating what’s hidden inside is so much more important than the gift itself. Michele Ferrero, the inventor of the Kinder Surprise Egg, has capitalised on this natural urge for discovery for almost 50 years now. At Easter 1974 the Italian confectionery manufacturer invented the Kinder Surprise also known as the Kinder Egg. Back then plastic Smurfs or miniature toy kits were hidden inside the fine casing of 20 grams of milk chocolate.

Over the years, the packaging of the surprises became increasingly professional. The tiny toys are now safely hidden in a yellow plastic sphere inside the chocolate egg – and they are so safe that little children’s hands could not even open them if they wanted to. Despite these safety precautions the Kinder Egg is considered a menace to American kids. Why? Because they are a choking hazard. A law adopted in 1938 prohibits confectionery that contains non-food objects. And this applies to Kinder Eggs 100%. But like everywhere else in the world people big and small always want to taste forbidden fruit. Which is why creative Americans would simply bring the confectionery eggs into the US from countries where they are sold legally or would just get someone else to bring them into the country for them. However, this sometimes proved expensive. In 2011 US customs seized to the tune of 60,000 smuggled eggs. At times, even unsuspecting travellers were in for an unpleasant “surprise” here since ignorance of the law – as the saying goes – is no defence. Which is why a Canadian lady crossing the border was fined US$ 300 because a single Surprise Egg was found in her car. She received a 7-page letter with the fine. 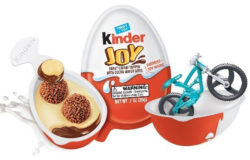 Finally, kids in the US can now also indulge in Ferrero’s toy-chocolate mix. In ‘Kinder Joy’ eggs the toy objects are packaged in a separate chamber therefore making this confectionery acceptable to the FDA. Photo: PRNewsfoto/Ferrero

Until now Ferrero had stood no chance of introducing the popular Surprise Egg onto the US market even though in excess of 45 billion units have been sold since the product’s market launch. And this was one reason why group sales were only as low as 6%. But all this is now set to change. After acquiring the two US companies Fannie May and Ferrara Candy the Italian family business has not only moved up the ranks to third place on the global confectionery market after Hershey’s and Mars, it has also shifted its principal market from Germany and Italy to the US after launching the ‘Kinder Joy’ in the USA in 2018.

With its two separate chambers hermetically sealed with film - one filled with a milk chocolate cream and crispy balls and the other containing a toy - Kinder Joy was originally designed for markets in warmer regions. But it now seems to be the suitable product for that long-aspired US market launch. Here, unlike in a Kinder Egg, the object is not completely surrounded by confectionery – therefore making it acceptable for the Food and Drugs Administration or FDA.

To obtain prime placement on the US market the Italians treated themselves to a costly marketing campaign with prime-time TV commercials during the Oscars in early March 2018 thereby surely addressing the target group of mothers. This is but small consolation for Leslie Dannelly though. She has been fighting for the legalisation of the original Kinder Egg since 2011 and has set up a “Free the Egg” petition calling for the introduction of this popular confectionery. 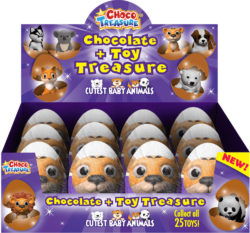 Strange but true: since 2013 the Candy Treasure sweet company has sold a chocolate egg, which also contains a plastic sphere with a toy. The small difference: the chocolate halves are separated by a plastic strip and therefore the toy is not completely enveloped in chocolate. Photo:chocotreasure.com

www.standard.co.uk
Kinder eggs go back on sale in the US - almost 50 years after they were banned

www.forbes.com
The Richest People In Europe

www.marketplace.org
Why the FDA doesn't like chocolate eggs with toys inside 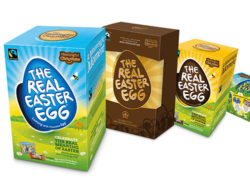 An outcry about Easter eggs 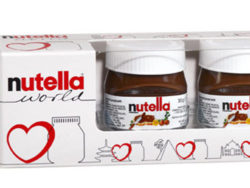 Jar with a Trademark Crack