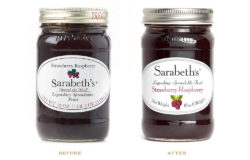 For Sarabeth’s Jam, Fili changed the colour of the lid from gold to silver, slightly modified the lettering and enhanced the label by adding a picture of the fruit and a frame around the edge. Photo: Louise Fili

We eat with our eyes

The impact of nicely presented food doesn’t start when it’s nicely served on a plate. It starts with attractive packaging design. Manufacturers are increasingly recognising the importance of their visual presentation and are therefore engaging professional designers. One of them is the Italian-American designer Louise Fili, who recently won an award from the American Institute of Graphic Arts (AIGA). Whenever she is asked to redesign a product, she first tastes the food, and this impression then serves as the basis for her first draft. She puts an emphasis on authenticity and visual appearance that inspires confidence.

Fili’s portfolio contains numerous examples of makeover projects, showing the packaging both before and after. For Sarabeth’s Jam, Fili changed the colour of the lid from gold to silver, slightly modified the lettering and enhanced the label by adding a picture of the fruit and a frame around the edge. In her redesign for the ice cream brand Gelato Fiasco from the US state of Maine, Fili replaced a simple plastic box with a high quality glass jar and gave it a silver screwtop lid. The colour of each label reflects one of the 24 varieties and tells the consumer straight away what kind of taste to expect. 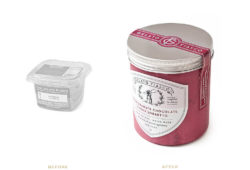 The colour of each label reflects one of the 24 varieties and tells the consumer straight away what kind of taste to expect. Photo: Louise Fili

It’s a fascinating subject which has even attracted the attention of researchers, and so there have been quite a few studies by now – for instance, the vending cup test by Charles Spence, psychologist at Oxford University, and Betina Piqueras-Fiszman from the Polytechnic University of Valencia. Respondents were asked to test four different varieties of hot chocolate, served in plastic cups in different colours: white, light brown, orange and red. The chocolate, however, was always the same, each time served in two varieties: sweetened and unsweetened.

It turned out that the respondents enjoyed their hot chocolate most when it was served in an orange cup. Brown cups, too, added a positive element to the flavour. On the other hand, red and white cups ended up at the bottom of the taste scale. But while the colour of the cup clearly impacted the perception of taste, the colour design of the packaging had less of an impact on the respondents’ sense of smell. Light brown cups were only marginally ahead of the pack. It was similar with sweetness. However, the researchers were unable to determine what exactly is responsible for controlling the impact on our perception of taste.

But there are further examples showing that packaging has a major impact.

The researchers came to the conclusion that there are no clear rules as to which colours enhance or weaken which taste. People’s perceptions are heterogeneous, and differences are reinforced by cultural differences. As ever, a good way to find out the best way to package a product is to conduct targeted consumer tests.

onlinelibrary.wiley.com
The influence of the color 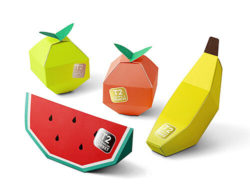 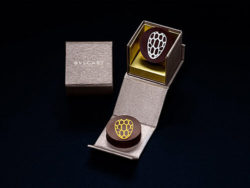 Packaging to Fall in Love With 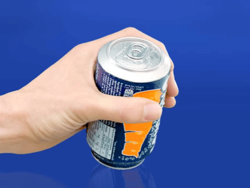