Our series showcases packaging that consumers immediately associate with a certain brand or product due to its type or shape. Making it synonymous with its content, and thus becoming the perfect brand ambassador. 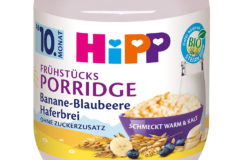 The German market leader for baby foods is celebrating a special 60th anniversary and has remained true to its company philosophy: high-quality organic ingredients in sustainable packaging. By 2025, recyclable materials are to be used exclusively for the more than 100 varieties available today. In its anniversary year, HiPP gives us a taste of things to come – the glass packaging currently used has a glass recycling rate of 98 percent.

The baby food company HiPP was founded in 1932 and switched its baby food packaging from tins to glass jars twenty-five years later. Today, the company produces over 300 million of these jars worldwide every year.

By doing so, HiPP already played a pioneering role on the market 60 years ago. Today’s HiPP jars are made of 70 percent used glass and have a glass recycling rate of 98 percent. Since 2016, the total weight has been reduced by 20 percent. These measures save 7,500 tonnes of glass every year.

When it comes to lids and transport, the company also continuously develops new solutions with an eye to environmental protection. In 2005, the company introduced a thinner safety vacuum seal in the lids. With a production of around 300 million jars per year, HiPP has since been able to save around 77 tonnes of tin per year whilst at the same time regaining up to 92 percent of pure tin.

The thickness of the PE shrink foil used in transport protection for HiPP’s six-jar trays has been steadily reduced since 2014, initially by 25 percent from 60 μm to 45 μm. In April 2019, this value was further reduced to 40 μm. The foil furthermore has a recyclate share of 50 percent. 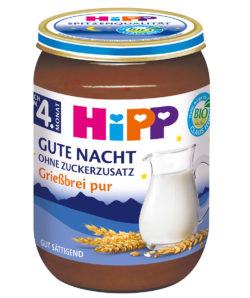 Today, HiPP jars (without content) weigh 25 grams less than they did just 30 years ago. Photo: HiPP

Besides baby foods, the German company has other organic products for our little ones in its portfolio. Among other items, the company is developing packaging for biscuits, direct juices and bars. In keeping with its sustainability strategy, HiPP aims to completely abandon the production of non-recyclable plastic packaging by 2025. In the course of the conversion, the family business is also working on packaging made out of wood, grass and other renewable resources.

In the “Craft Idea” section of its website, HiPP provides inspiration on how packaging that is currently non-recyclable, such as used jars and the like, can be put to good use. 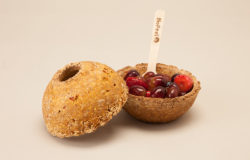 Packaging made from orange peel