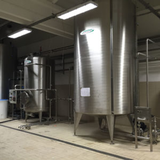 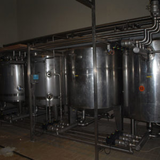 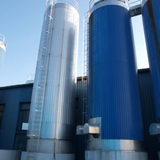 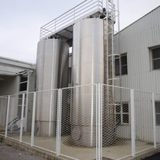 Double jacket tanks
DOUBLE-JACKET TANKS - HORIZONTAL AND VERTICAL Capacity from 50 to 100 000 lit. Made of AISI 304 or AISI 316 stainless steel. Application in all kinds of food, chemical and pharmaceutical industry. Depending on the type of the product, different types of mixers and attachments are fitted.

Manufacturing facility of FRASSINOX BOŽIĆ d.o.o. is located in Donja Stubica and was built in 1978. Later it was expanded and today performs production activities in same facility in Donja Stubica. Company conduct their business activities on the Croatian territory, and all former republics of ex-Yugoslavia and it is also present in the area of EU countries (Austria, Germany, etc.).

Business activities are solely related to the production equipment in the food industry:

The company has participated in the construction of the dairy farms on the territory of the Croatian Republic and Bosnia and Herzegovina and milk coolers on the entire area of the former Yugoslavia.

It should be emphasized that during the 39 years the company operated under several different names but did not change its product range, therefore on the existing location production takes a full 33 years. Within the company since 1999 the car service for brand KIA is existing.

The company possesses the necessary certificates for services on domestic and foreign markets that are aligned with EU standards and apply to the total territory of the EU.