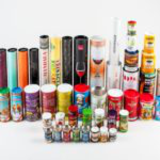 At present we can prepare for you cylindrical containers of internal diameter 45 mm to 116 mm and length from 60 to 500 mm. Lids and bottoms are from plastic and metal. We know how to connect them; provide them with aluminium linings, aluminium seals, membranes with little tongues, dredgers.

On the surface of the cylindrical packages we are able to fix the colour labels printed by graphic design. The label’s surface can be adjusted according to the customer’s choice, gloss or matt varnish. We also offer labels bearing the UV varnish, embossing and Braille characters. 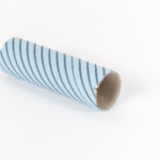 Typical for these cores are the requirements of precision and strength of the core. For every customer we prepare bespoke solutions so that we can adapt to his machine equipment and the type of manufactured artificial fibers. We can make them in different colours and different surfaces. On request – our customers can obtain the core grooves, circumferential grooves, crimping the ends, bracing the ends, cut in the shape of Y, etc.

The inner diameter of our products start at 40 mm and end at 110 mm.

Cores for chemical fibers are used in the chemical industry for the production of synthetic fibers. Our customers include manufacturers and processors of polyamide, polyester, polypropylene fibers throughout Europe. 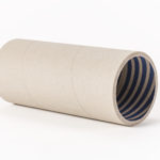 The inner diameter of our products begins at 6 mm and ends at 628 mm.

We can print different kinds of rolls. On your roll we can print date, size, company name and its logo, and inside and outside of the roll. Of course, only if you want.

We will prepare colored surface, knurled (embossed), hydrophobic, silicone barrier and even with a layer of PE or double sided tape.

We manufacture rolls with different strengths and different tolerances in the length, inner and outer diameter. Your roll can be punched or cut through : we simply deliver exactly what you want.

Our customers use paper tubes, rolls and cores for winding different types of materials e.g. paper, foil, textiles, carpets and many other flexible packaging materials. It is also used as a core during coiling plates, metal strips, wires, and also for the manufacture of coils and cable drums. Sometimes they are used for the fixation of goods transported or for decorative purposes.

In 1890 there were 260 people employed in the plant in Lanskroun. A new production hall as well as a maintenance hall and also impregnation and drying workshops were built at that time.

The company has specialised, as the only plant in Europe, in producing impregnated and varnish cores since 1906.

In 1929 a new boiler was built with a chimney stack that, with its height of 65 m, became a dominant landmark in Lanskroun.

In 1930 Mr. Theodor Pam, one of the 5 sons of Moritz Pam, patented Bakelite cover of reels with the Trade Mark „Paco“.

In 1994, 5 years after the velvet revolution, the company was privatised and renamed ORlické PApírny (ORlické hory = Eagle Mountains, PApírny= Paper plant). This name had become the base of the company name ORPA created in 2002.

Since 2007, the company was renamed to its current name ORPA Papír a.s., shortly ORPA.

It is absolutely clear that during the long history since 1884 a very strong know-how as well as good name and tradition have been created. The plant´s employees are pure professionals based on experience and knowledge passed down through generations. Even today, there are a lot of people, whose mother, father, grandmother or grandfather were employed with ORPA. They worked not only in the same company, but also, in a lot of cases, in the same working position. So, perfect knowledge and experience are the result of this heritage. The only difference is that parents were working with the older mechanical machinery in comparison to today’s new, modern, efficient and automatic production lines.